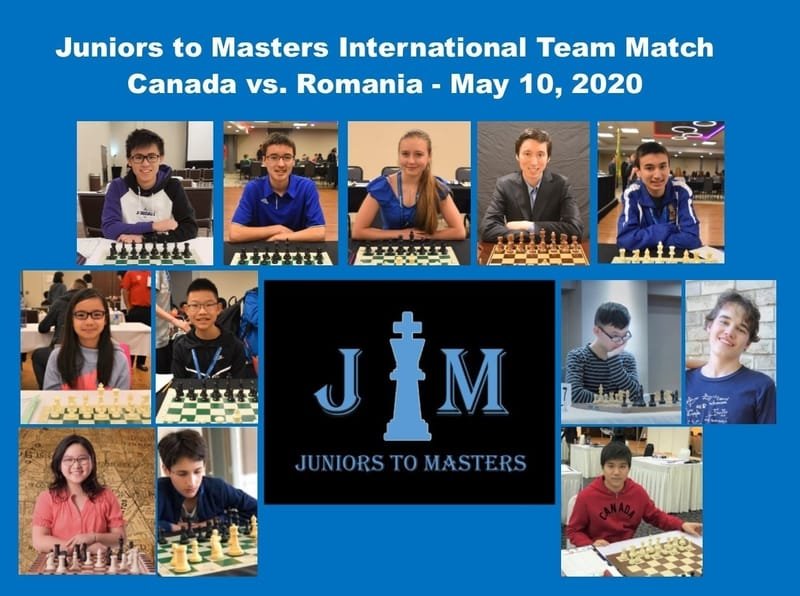 On Sunday, May 10, 2020, our Juniors to Masters Canada Team played in a friendly international team match with IM Catalin Ardelean’s LPS Satu Mare and Friends Romania Team. This team match gave us an opportunity to recognize the hard work and volunteer efforts of our JtM In House Masters and our JtM Leadership Development Team, and as such we were able to assemble two fairly balanced teams for this exciting match.

Our 12 Boards JtM Canadian Team played two rapid games (15 mins + 10 sec. incr.) on chess.com with the same opponent (as Black and as White). The 2-Round team match was then followed by a friendly Blitz team match.

After Round 1, the team match score couldn’t have been closer:
Juniors to Masters Canada Team = 5.5 pts and LPS Satu Mare Romania Team = 6.5 pts.

Heading into the final round, Round 2, and trailing by 1 pt., our JtM Team knew the magic team number needed from the combined 2 rounds’ team match score to be 12 for a team match tie result and 12+ for a team match win.

Round 2’s team match score was just as close as Round 1’s, but this time the scores were flipped:
Juniors to Masters Canada Team = 6.5 pts. and LPS Satu Mare Romania Team = 5.5 pts.

After the Team Match with rapid games, we went right into the 2-Rounds Blitz Team Match. Time control was 3 mins + 2 sec incr. and pairings were automatically done by Chess.com based on Chess.com Blitz ratings.

GM Gergely Szabo and IM Catalin Ardelean did an awesome job coordinating and coaching their respective teams to prepare for this international team match, along with Victoria Doknjas who performed the Team Manager duties. Special thanks to the JtM Team’s Parents for their support during the planning stages of this international team event and the actual event itself.

We hope both teams enjoyed our friendly international team match, and we look forward to the next Juniors to Masters team event.

Please check back for GM Gergely Szabo’s post-game analysis as he will provide commentary on some of the more interesting positions from the Juniors to Masters International Team Match.

Juniors to Masters Inc. is the provider of the National Training Program for Canadian Youths, as sanctioned by the Chess Federation of Canada. Juniors to Masters Inc. was founded by GM Gergely Szabo and Victoria Doknjas. GM Gergely Szabo has been Team Canada’s Head Coach at WYCC, WCCC, World U16 Youth Olympiad, and the Women’s Olympiad. Victoria Doknjas has been Team Canada’s Head of Delegation at multiple WYCCs and NAYCCs.

I BUILT MY SITE FOR FREE USING